A chapter by M. Umemura in her new edited book Comparative Responses to Globalization: British and Japanese Enterprises, with R. Fujioka (Palgrave Macmillan, 2012) 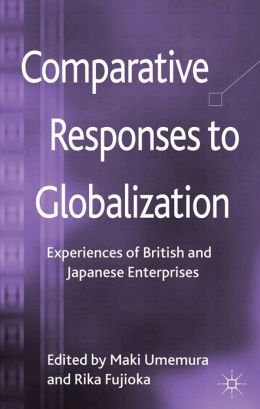 The authors of this volume explore how British and Japanese firms have responded to globalization from a long-term perspective. Around the world, firms have responded to globalization in diverse ways, from expanding their operations, differentiating their products, normalizing risk, to adopting new knowledge. While many works have examined the impact of globalisation on firms, most such studies are ahistorical and only focus on the recent phase of globalisation, since the late 1970s. Comparative Responses to Globalization examines these developments from a historical perspective, as firms have been responding to globalisation since at least the 19th century. It sheds light on the impact of the institutional setting; the influence of government and entrepreneurs; and the weight of historical contingency in conditioning firm responses. It also touches upon the extent to which specific varieties of capitalism or distances between certain cultures help explain firm responses to globalisation.