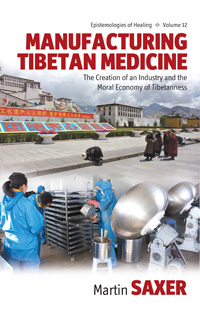 Within a mere decade, the creation of a Tibetan medicine industry in the People's Republic of China has resulted in hospital pharmacies throughout the Tibetan areas of China being converted into pharmaceutical companies. Confronted with the logic of capital and profit, these companies now produce commodities for a nation-wide market. While these developments are depicted as a big success by the Chinese government, they have been met with harsh criticism in Tibet. At stake is a fundamental (re-)manufacturing of Tibetan medicine as a system of knowledge and practice. Being both important to the agenda of the Party State's policies on Tibet and to Tibetan self-understanding, the Tibetan medicine industry has become an arena where different visions of Tibet's future clash.

Martin Saxer received a PhD in Social and Cultural Anthropology from the University of Oxford and is currently a research fellow at the Asia Research Institute, National University of Singapore.